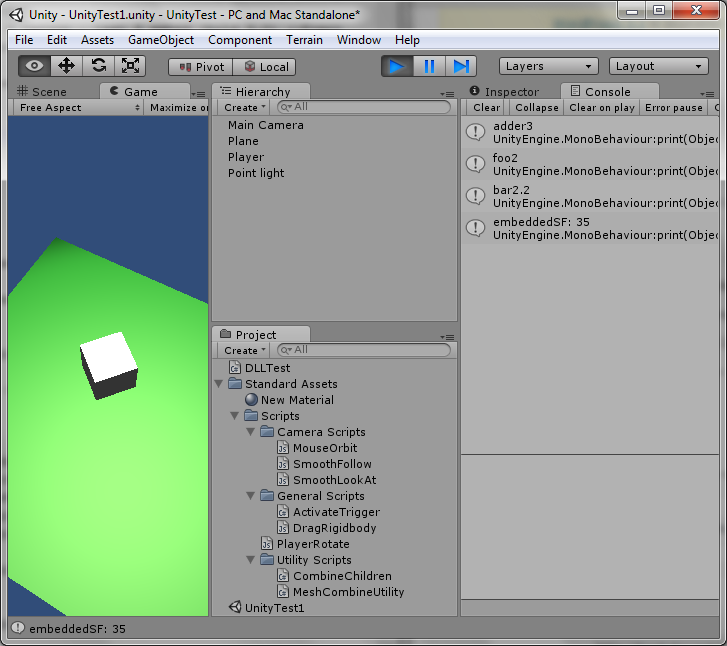 This post describes how to connect Haskell to Unity3D by compiling a Haskell shared library to a Win32 DLL and dynamically loading the DLL in a scripted Unity3D object via DLLImport. The DLL also uses an additional module (Yampa), thus FRP can be used within a sophisticated game framework (with the exception that this concept doesn’t connecte to the Unity3D core yet, which would allow stateful arrows within the game logic… which renders it rather useless right now :/). Unity3D was chosen because it provides a complete game creation workflow and a demo version is available for free. In contrast, there are no full game creation frameworks available for Haskell right now (to my knowledge, but my status is based on ). DLLs were chosen over .NET libraries because to my knowledge it is not (yet) possible in Haskell to compile to a .NET library (and I think it was one of the reasons why F# was born). .NET libraries would of course allow for an easier integration in Unity3D. Unity plugins are only available in the pro version… which is a pity. My personal goal was to connect functional temporal programming (functional reactive programming) to a sophisticated game framework to allow the creation of great games with FRP game logic. Besides, it was a great exercise for foreign function interfaces (FFI) and a test on how well Haskell can be integrated into existing applications.

What actually happens when a Haskell program is packed into a shared library and called from an external program? The actual DLL is built from C code, which exports the Haskell functions and also starts up a Haskell runtime, which delegates the external function calls to Haskell. All functions are called within an unsafe environment, like main :: IO () (… this shouldn’t necessarily be the case I think – FFI to Miranda?)

The actual concept is pretty straight forward. Simply write all Haskell functions and make the function interfacing to the external program an IO monad, which gets called by a potentially inpure program. The program and all depending modules are compiled into one big DLL. This DLL gets imported by the external program (Unity3D) and makes the functions visible. Before an Haskell function can be called, a complete Haskell runtime environment has to be started. In the following example, when an object is created, it starts up a Haskell runtime, runs an embedded arrow and shuts the Haskell runtime down again. This is of course rather useless right now, but it shows an arrow running in Unity3D.

I don’t know how to integrate stateful arrows into the game logic yet. Probably the Haskell runtime within the DLL has to be started on some OnGameStart-event. Each object has to run its own independent arrow code and the update ticks propagated to something like the reactimate procedure.